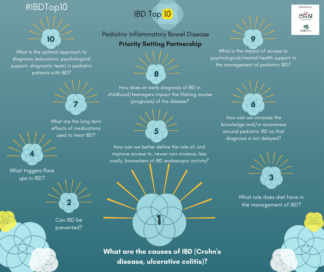 Toronto, Ontario – June 28, 2017 – The Canadian Children IBD network: a joint partnership of the CH.I.L.D. Foundation and CIHR is pleased to announce that its research team and patient engagement steering committee have identified the top 10 unanswered questions relevant to establishing the causes and management of pediatric inflammatory bowel disease in Canada.

Researchers sifted through over one thousand (1209) raw questions from IBD stakeholders, including children and teenagers, parents, caregivers or family members of children with IBD and clinicians who care for IBD patients.

Through the JLA process these were narrowed down to 388 unique questions that were further refined to 105. Following a secondary national ranking survey, the top 19 research questions were identified.

“Despite years of clinical experience, research has shown healthcare professionals alone can not capture all the relevant questions that matter most to patients and caregivers. A gap still exists.

Ranking the top research uncertainties in small groups where patients’ perspectives and experiences alongside those of caregivers and clinicians are heard, had a huge influence on what ultimately made the top 10. I know that the final top 10 has been informed by this cross Canada collaboration of key IBD stakeholders.”    Dr. Anthony Otley – Principal Investigator

“Being involved in this research project has been a great experience. As a patient, having the chance to voice my questions and contribute to the research of Pediatric IBD was extremely rewarding.”     Malcolm – IBD Patient

“Taking part in the IBD research was a great experience. Being a former pediatric patient, I was able to voice my own opinion about which questions were most important to me. I wanted to be a part of this project so I can help other patients and families with questions that have not yet been answered; especially the question all IBD patients have “What causes IBD?”. I hope that with the results of this research, pediatric patients and families will have answers and doctors will have better techniques and technology that will help with treatment. It was important that patients were involved and used their own experiences to help choose the most important questions.”            Muneet – IBD Patient

The Canadian Children IBD Network is committed to improving research and ensuring that a sustainable patient engagement agenda exists across Canada. It is against this backdrop that (on World IBD Day, May 19, 2017), the Network unveiled the final top 10 research priorities of people directly affected by pediatric IBD.

To find out more about the priorities, visit the Canadian Children IBD Network (www.cidscann.ca/engagement.html) and the Maritime Intestinal Research Alliance (MIRA). (https://mirapeds.ca/giresearch/ibdtop10)

The two main forms of Inflammatory Bowel Disease include Ulcerative Colitis (UC) and Crohn’s Disease (CD).  [1]  Canada has one of the highest rates of IBD in the world [2]). More than

10, 000 new cases are diagnosed each year, typically in patients in their 20s. However it is not uncommon for diagnosis to occur at any age, including among children. [3]. In fact, in Canadian children under 10 years, the incidence of Crohn’s disease has doubled since 1995 [1]

Patients diagnosed with Ulcerative Colitis and Crohn’s Disease suffer from unpredictable inflammation and ulceration. This can cause severe pain, cramps, bloody diarrhea, nausea, vomiting, weight loss or gain, anemia and debilitating fatigue affecting overall quality of life. Children with IBD can often miss school and taking part in activities, and can experience slowed growth because of their disease.

The exact cause of IBD is not entirely understood; it is however thought to be a result of an interaction between the body’s immune system, genes, and possibly environmental factors also playing a role. [4]

About the Canadian Children IBD Network

The Canadian Children IBD Network is Canada’s first National Pediatric IBD Network, bringing together scientific researchers physicians, nursing professionals, dieticians, clinical investigators, and laboratory-based scientists from across Canada, with the common goals of understanding the causes of Inflammatory Bowel Disease and ensuring best use of treatments. This collaboration has been made possible through a joint partnership of the Canadian Institutes for Health Research (CIHR) and the CH.I.L.D. Foundation (http://www.child.ca).

[3]. Crohn’s and Colitis Canada, The Impact of IBD Report, Who is affected; accessed May 29, 2017 at: http://www.crohnsandcolitis.ca/About-Us/Resources-Publications/Impact-of-IBD-Report

[4]. Crohn’s and Colitis Foundation of America. The facts about Inflammatory Bowel Disease, Page 5 Accessed May 29, 2017 at: http://www.crohnscolitisfoundation.org/assets/pdfs/ibdfactbook.pdf

Explore
Follow us on Twitter View all tweets
MIRApeds @mirapeds
In finding the Top 10 unanswered research questions in IBD, we have uncovered questions that have answers. Watch th… twitter.com/i/web/status/1…
About 19 hours ago
ReplyRetweetFavourite
MIRApeds @mirapeds
Participant contributions to IBD research is fundamental for finding better tools and measures for diagnosis, treat… twitter.com/i/web/status/1…
13:30, Fri
ReplyRetweetFavourite
WWW.MIRAPEDS.CA
Website by ViBE CREATIVE GROUP