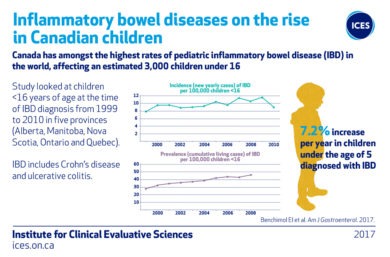 TORONTO, April 11, 2017 — Canada has amongst the highest rates of pediatric inflammatory bowel disease (IBD) in the world, and the number of children under five years old being diagnosed increased by 7.2 per cent every year between 1999 to 2010, according to a new study by researchers at the Institute for Clinical Evaluative Sciences (ICES), Children’s Hospital of Eastern Ontario (CHEO) Research Institute and the Canadian Gastro-Intestinal Epidemiology Consortium.

“The number of children under five being diagnosed with IBD is alarming because it was almost unheard of 20 years ago, and it is now much more common,” says Dr. Eric Benchimol, lead author of the study, scientist at ICES and a pediatric gastroenterologist at the Children’s Hospital of Eastern Ontario Inflammatory Bowel Disease Centre, in Ottawa.

IBD primarily includes Crohn’s disease and ulcerative colitis, which are lifelong conditions that cause inflammation in the digestive tract, leading to chronic diarrhea, blood in the stool, abdominal pains and weight loss.

The study published today in the American Journal of Gastroenterology, identified children under 16 years of age diagnosed with IBD from 1999 to 2010 from five Canadian provinces (Alberta, Manitoba, Nova Scotia, Ontario, Quebec) , and found that cases among children five and younger have increased 7.2 per cent per year from 1999 and 2010.

Researchers say a change in the bacterial composition of the gut may be to blame for the increase in IBD cases but they don’t know what is causing the change. They suspect a combination of environmental risk factors could be to blame, such as early life exposure to antibiotics, diet, or lower levels of Vitamin D in Canadians.

“What our research tells us is that we need to focus future research on identification of triggers in young children with IBD, understand the biology behind changes resulting in the disease, and intervene to prevent the occurrence of IBD in this vulnerable age group,” adds Benchimol.

The researchers found that the incidence of IBD has stabilized in children over the age of five, but in children under five it continues to rise rapidly.

Almost 3,000 children under the age of 16 years old are currently living with IBD in Canada.

The Institute for Clinical Evaluative Sciences (ICES) is an independent, non-profit organization that uses population-based health information to produce knowledge on a broad range of health care issues. Our unbiased evidence provides measures of health system performance, a clearer understanding of the shifting health care needs of Ontarians, and a stimulus for discussion of practical solutions to optimize scarce resources. ICES knowledge is highly regarded in Canada and abroad, and is widely used by government, hospitals, planners, and practitioners to make decisions about care delivery and to develop policy. For the latest ICES news, follow us on Twitter: @ICESOntario 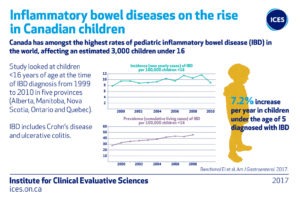 Explore
Follow us on Twitter View all tweets
Crohn's and Colitis Canada @getgutsycanada
We are pleased to announce we have released our Impact of COVID-19 & Inflammatory Bowel Disease in Canada report, summa…
8 JulRetweeted by MIRApeds
ReplyRetweetFavourite
MIRApeds @mirapeds
Excited to be working with @AccompliceCSC on our final patient engagement research video, where we asked stakeholde… twitter.com/i/web/status/1…
18 Jun
ReplyRetweetFavourite
WWW.MIRAPEDS.CA
Website by ViBE CREATIVE GROUP